After midnight still many stations active, signals also improve on the 76 mtrs.

Now in the evening R.Five has a good signal here in the north.

To night the activity were high on the 76 mtrs, but why must the stations be so close to another. Look there, 4 stations in 10 khz space and everyone suffering from interference. Isn't it better to stay some 5 kc or better 10 kc apart. Less interference = more enjoyable for the listeners.

This evening conditions was not good, lots of noise and low signals. Anyway this is what i heard when i was tuning around the bands.

Some activity noted in the 76 mtr band. Hard to get any ID of those stations.

The conditions last weeks has been not so good so only a very few stations has been heard here at my QTH in Kalix NS. 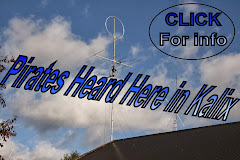